The city of Meridian, ID had antiquated point-to-point wireless systems connecting water and wastewater sites to City Hall. These systems were continually failing and disrupting critical monitoring. The Public Works Department’s systems were also unsecured and susceptible to breaches.

To date, the city’s IT team has replaced the old solution with Tempered’s Airwall Solution across 26 sites and counting, ensuring consistent monitoring and giving the Public Works Department peace of mind. Airwall’s purpose-built, zero trust security prevents breaches and attacks.

The IT department enjoys Airwall’s quick deployment whenever they have to update a new site, as well as fewer disruptions from systems going offline. The team has also begun deploying Airwall to other departments, ensuring secure business continuity for critical networks.

The City of Meridian’s centralized IT Team needed to consistently monitor things such as well pressure, chemical deposits, and chlorine levels in order to adequately maintain the city’s water and wastewater for its 110,000 taxpayers. To that end, the department needed to be able to communicate with well stations, lift stations, pressure reducing valves, and other locations throughout the city.

The point-to-point wireless systems connecting these locations back to City Hall were constantly losing connectivity. This disrupted monitoring and frustrated the public works team, the residents, and the city’s IT team alike.

“There are just a lot of issues that are inherent to those types of systems as time goes by,” explained Eli Daniel, the city’s network administrator. “Trees grow up, new buildings go up. We were trying to find a solution to replace that, because we knew that we were just going to keep hitting the exact same problems for the rest of our lives. Being in that role, I didn’t want to be in charge of that for the rest of my career.”

Security was another issue: The point-to-point systems were using standard wireless encryption and authentication protocols. This made critical infrastructure, like the city’s sprinkler systems, vulnerable to breaches and attacks. The implications of such breaches ranged from mismanagement of city resources to something potentially far more dangerous.

The IT team first turned to traditional VPNs to solve these communication and security issues but found only “expensive and hard-to-manage solutions,” according to Eli. “It got really expensive fast and seemed like a more cumbersome solution than we were wanting.”

Tempered’s compelling product offering persuaded the IT team to go with the Airwall Solution.

The team originally had issues deploying because their cell carrier drivers needed to be updated or changed, as they discovered later. To help them identify the problem, Tempered CEO Jeff Hussey and CTO Bryan Skene flew out to Meridian.

“It was encouraging to see the leadership team come fly in for the day and spend that time with us,” Eli reflected. “They were at the well with us for hours, troubleshooting, getting in there, and looking at code. It was phenomenal to see the level of service and dedication that they had to providing service for us. You don’t see that with anybody else.”

Tempered helped the IT team identify and fix the problem, and they “have been solid ever since.” They have connected 26 sites back to City Hall so far and plan to replace the point-to-point systems for about half a dozen more sites every year. Just in case something breaks or they need to do critical deployment, they keep two extra Airwalls on hand at all times.

Ease of deployment: Replacing the point-to-point system with an Airwall is “as easy as dropping off a physical Airwall Gateway inside of a cabinet and plugging the ethernet cable in,” according to Eli. “I promise it’s less than an hour of my time to get cellular provisioned and get it into the overlay network. It’s just so easy to administer.”

Time savings: The IT team enjoys far fewer disruptions from systems going down and easier, more efficient fixes. “If we stayed with some sort of point-to-point system or did a multi-product solution for these sites, there’s no way that I’d be able to do everything I need to do in an hour,” said Eli. “The time savings from having contractors go out to fix the point-to point system or me having to provision new VPN equipment — Airwall is just so stinking easy.”

Security: With all of their systems secured via micro-segmentation, the Public Works Department no longer needs to worry about their critical infrastructure being breached. After more than 3 years of use, Eli still feels “comfortable and confident in the security” that Airwall provides.

Unparalleled customer service: On the rare occasion that the IT team has technical issues, Eli is confident in Tempered’s support staff. “I feel like that relationship with Tempered is that special secret sauce — to be able to reach out to someone and have actual contact,” Eli said. “That’s one of the problems I’ve had with a lot of other vendors and technology. It’s hard to beat.”

Meridian’s IT team originally meant to use Airwall for Public Works’ water and wastewater sites, but they continue to find additional uses for the solution. For instance, when a dark fiber connection went down in the city’s Police Department, they were able to patch it with an Airwall within an hour or two to keep communication flowing.

Likewise, when the Parks Department acquired a new building, the team used Airwall to enable industrial control system (ICS) management from City Hall. Eli said, “We were able to take the Airwall to the HVAC panel over at the parks building and plug it in. Just a couple minutes of configuration for an overlay network and boom — they were up. They could program their temperatures and everything for controlling the climate in that building.”

The team deployed the orchestration engine for provisioning, segmentation, allocation, and revocation of the network in the cloud. The Conductor allowed them to visualize their segmentation and do granular white listing of the network.

Identity-based routing devices were deployed in the cloud and placed in front of the overlay network to securely connect and route traffic across cell and IP networks. 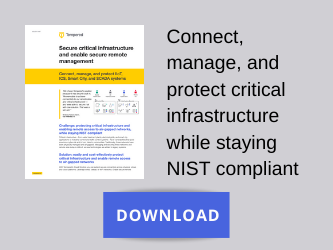 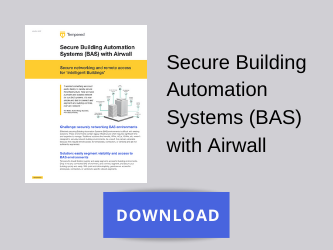 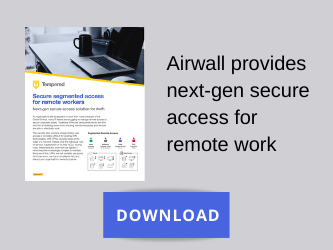